Introducing, Kristina Karpechenkova, our Miss Bikini 2015 champion! We decided to catch up with her and see where she is now and how her experience in the competition changed her perspectives and her life. Say hello to one of the most energetic, beautiful, and sweet ladies we have come across in our story to success.

1.Tell us about your experience in our competition?
Participating in GDTV Miss Bikini contest first in Los Angeles and then in Guangzhou, China was one of the most exciting things I did last year.

I was put into an environment where a “show” has to be created from the very beginning like planning a program on a half-decorated stage to the final run-through on the night of the performance in a short period of time. That was exciting!

We who participated in the show in Los Angeles didn’t know each other before, so thank you, guys, who are in GDTV team, for making the atmosphere fun and easy-going. I am still in touch with some models and designers that I met there.
I remember being so surprised and so happy when knew I was a winner. It actually took me half a year to spend the check in the sceptre.com store: I had to come back there for another and another TV because they simply would not fit inside the car. Now some of my friends and I have TVs and sound-pals of different size and color from the Sceptre store which we absolutely love, by the way!

2. What was the final competition like in China? What was going through your head?
It was not just a one time event, it was a show that had been running for three months already and had an episode on TV every week. And every week three participants would leave the show and three more new models would join. Bibi (a girl who won the second place in Los Angeles) and I made it right into the finals. We were just lucky, I guess.
All the girls who participated in the final show were living on the same floor in one of the GDTV Company hotels. We would wake each other up in the morning, grab some breakfast and go to a rehearsal. Some of the days we had lots of free time to explore the city, and some of the days we spent just rehearsing.

As for the city Guangzhou, oh, that place made me fall in love with it. I absolutely adored the tropical climate when it rained but was never cold. In that city you are never in charge of your hairstyle because of such humidity in the air.

I’m so glad we came together with Bibi to China.If not for her, I would not be able even to order a simple meal or to get to the closest subway station (my knowledge of the Chinese language is very poor). I will never forget how we shot a commercial on the street with other girls, how we spent hours and hours shopping, how we rode motorbikes and ate grilled seafood in a street restaurant at night. I was also very lucky to watch the performance of one of them most known circuses (ChimeLong International Circus) while being in Guangzhou, because two of the girls from the contest are currently working there as dancers and they took me there. They are Ukrainian, and it is interesting that the majority of the performers in that circus are either from Russia or from Ukraine.

3. What was the biggest impact on you and your life from participating in the contest?
I was fascinated to see how emotionally attached some girls were to the show. They were together for three months and of course it was difficult to say goodbye. But as for me, I never planed to participate in such event or to win though I did take the opportunity with all my respect. It was something life gave me as a present and I decided just to have fun.

Later I noticed how that positive attitude affected my mood and body. And now when I feel that I don’t want to do something I just remind myself why I need to it and turn it into something I actually want to do myself and try to imagine how amazing I will feel myself after this “something” is done.

Sometimes we think if we do not succeed 100% it means we fail, but that is wrong, I think. Every our belief, experience, and realization is worth effort.

Of course sometimes it was hard. Just the name of the contest requires from its participants to look good, to behave good etc. But what is good, what is beauty? Maybe beauty cannot be measured by inches, pounds or a color of hair, maybe beauty can be measured with “watts” of kind and positive power that we spread to the world and in balance with which we can arrange our life.

Those girls who were in the show were not the same height or weight but all of them were so energetic and funny and fun. It is true: the happiest girls are the most wonderful.

4. Where are you now and what are you doing?
I am still a current student of New York Film Academy in Los Angeles. But right now I am taking a semester-break and am located in New York City. It’s my first time to be in NY. It was a little random decision, but my family supported me. Only here I’ve realized how much we trust each other in my family how much my realities mean to me.

I go to acting auditions and pretend that I don’t care when they say “no”:) I am kidding: I passed that stage of being depressed because of “nothing to do”. I’ve realized that there is always a way to work things out, and you can always work on something of your own (an idea, a project, etc). The main part is “to start”. And then the right people and circumstances will begin to appear. So right now I am working on some projects of one young director and one writer.

Hopefully it will bring good experience.

New York is great. I feel like this city does not have a time zone. Everybody can open their own unique New York no matter what the person loves: art, history, sports, science, etc.

One of my favorite places here is Housing Works Bookstore Cafe on 126 Crosby St. You take a cup of tea or coffee and sit surrounded by hundreds of books in anybody’s taste: you can read, talk, eat. I can’t even imagine how many incredible ideas have been discussed between friends and coworkers in that place.

Another amazing place is High Line. Back in the days there used to be a railroad but later it was turned into an awesome place for tourists and New Yorkers. It is a path that goes along the Hudson River and is full of contemporary art and style. The railroad is still there but just for attraction, now you can even see trees growing through it.

5. If you could spend a year anywhere you’d like, where would it be?
I would love to go to Europe, especially France. They say you can travel by car from one European city to another. There is a cafe on the boarder of Belgium and Netherlands that you can enter from one country and exit to another.

6. Where do you get your beautiful style inspiration?
I believe that physical and emotional states of body are connected and if something inside changes, it will lead to the changes on the outside as well. I am inspired by my friends, teachers and family.

Life was very kind to me to introduce to such incredible people who are full of energy to grow and become better everyday. I look at my schoolmates from New York Film Academy, see them putting up plays and films and I want to become a better actress and artist so I can participate in these projects. I look at my girlfriends in Los Angeles, Moscow, Vladivostok and see them being interested in fashion, healthy way of life, I see them happy and I want to be happy.
I have friends who fascinate me with their focus of interests, including politics, art, literature and they influence me with that energy. So this is where I get my inspiration: I try to see good things in other people. 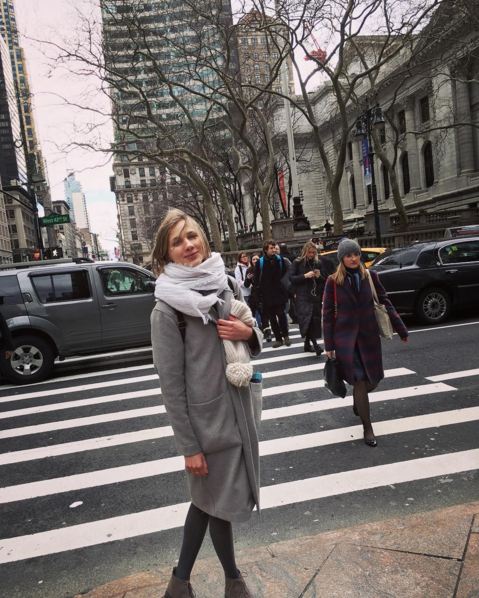 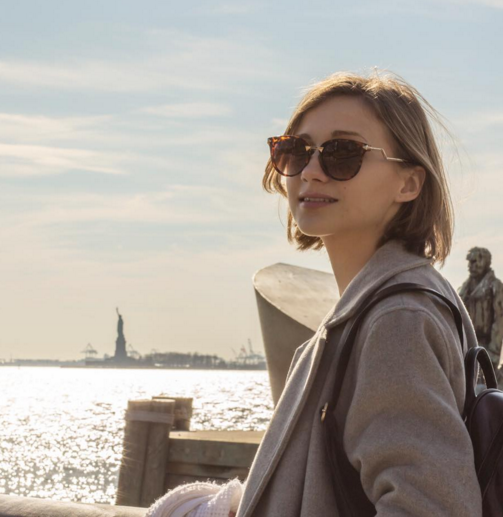